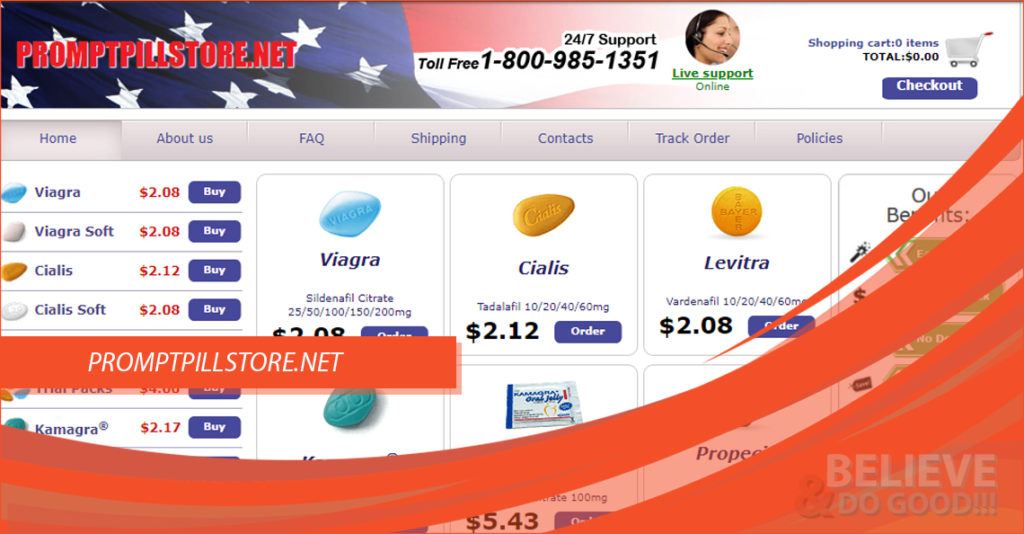 Promptpillstore.net is another drug pharmacy that is no longer online which claimed to have served their customers for 9 years before running out of business. I tried all means to access the website but there was no connection available including searching for independent reviews but there was none available. The earliest capture for promptpillstore.net was in 2012 which would be the year it was established.

Promptpillstore.net only dealt with the sale of generic medications that were sourced from reputable Indian Manufacturers. These medications were listed on the homepage so that it would be easier for their customers whenever they logged in to place their order. Some of the drugs include Zithromax, Propecia, Lasix, Clomid, Priligy, Cipro, Plavix, Diflucan, Kamagra Oral Jelly, Generic Viagra was offered at $2.08 per pill, Generic Cialis which would cost $2.12 per pill, Viagra Soft, Levitra, Kamagra Soft, Kamagra,Amoxil, Levitra, Trial Packs, and Kamagra Soft, among others. Some of the medications that were stocked at promptpillstore.com required a valid prescription which was to be faxed before the processing of the order.

Customers buying medications from promptpillstore.net would use Visa, MasterCard, American Express, Wire Transfer, and eCheck. The customers were only allowed to cancel orders within 10 hours after placing their orders. It was required that the support team had to be notified of the decision to cancel the order before the 10 hours expired.

The delivery of orders from promptpillstore.net was via first-class mail delivery method which would take a duration of 7 days before the package was delivered. Shipping was only within the boundaries of the United States which means that those that lived beyond the US would have to look for another online pharmacy to buy from. The cost of the shipping was $35 which is quite expensive compared to other methods of shipping. However, for the shipping of orders that were above $200, no fee was charged. There was no option of a next-day delivery where the customers would be able to get their medications sooner if they were required urgently as the shipping option was only USPS.

If in the process of shipping the drugs they were lost or ruined, customers were advised to contact the support team at promptpillstore.net and a refund would be processed within a maximum of 7 days. It has not been mentioned what would happen if a customer preferred to have the medications reshipped instead of getting a refund for the amount spent on the purchase.

To contact promptpillstore.net, customers would use the toll-free number 1-800-985-1351 to make a call or use the contact form that was provided on the homepage to send a message. A response to the message would be sent via the email address that a customer would provide during the purchase. A live chat option was also available where the customers would engage the support team and get immediate answers for their concerns. Since the live chat option is no longer functional, it will be impossible to know how fast the customer service team was in responding to the customers’ questions or comments.

The lack of reviews makes it difficult to know the kind of services that promptpillstore.net used to offer to their customers, whether the pills were effective and if the delivery was made on time once the order was placed.

I checked the opinion of scam advisor and promptpillstore.net was given a 45% rating and customers advised to keep away from it. The site was also not secure and the private details that customers submitted when making their purchases would have been accessed by third parties.

Since promptpillstore.net is no longer in business, it will be impossible to find any recent reviews. The only available information is the blog posts that are on their homepage which have not been posted by customers.

Promptpillstore.net has a few discounts that customers will benefit from when making their purchases. Among the major benefits is the free shipping for all orders that will be above $200. This means that the customers got this offer saved $35 which was usually charged for the shipping.

Looking at the prices of the medications that promptpillstore.net used to stock, the prices were lower for the larger packs and customers who wanted to spend less would buy their prescription medications at once. For instance, a 10 pills pack of Viagra would cost an average of $7 whereas a pack of 120 pills will cost an average of $2.08b per pill.

Promptpillstore.net is a web pharmacy that is no longer operational. There are no reviews from the customers who used to shop from them either on their website or from independent review sites. This makes it impossible to find out if this was a legit online pharmacy which used to make timely delivery of medications or a scam website that did not honor the orders placed by their customers.

The prices of the medications that promptpillstore.net stocked were higher compared to the prices of similar products in other online pharmacies. The drugs had not been approved by the FDA but it was assumed that the pills were sourced from reputable drug manufacturers located in India. The lack of vital information such as where the website is located and whether it has been approved by the regulatory bodies are among other issues that make me doubt the credibility of this pharmacy. A customer who used to shop at promptpillstore.net will have to look for another online pharmacy to buy his medications from. Customers who need guidance in choosing the right online pharmacy can check out our list of Top Web Drugstores.