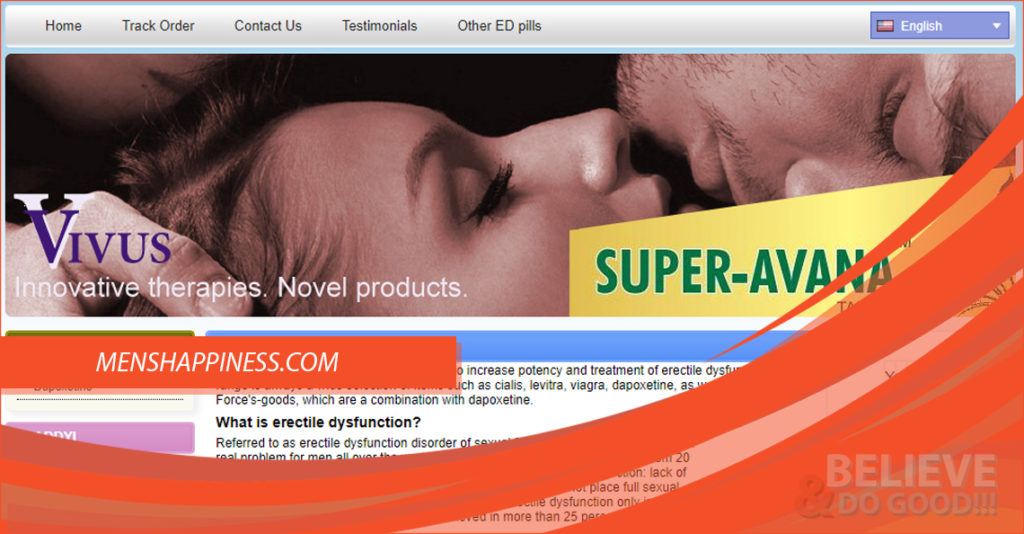 Menshappiness.com was an online pharmacy whose physical location was not indicated on its website. The drugstore official website suggested that it had been operating for approximately a decade although the actual year when the pharmacy stated operating was not indicated. Just like the drugstore name suggests, the pharmacy was focused on offering products which could make men happy. Menshappiness.com catalog only had erectile dysfunction meds. The pharmacy is currently offline.The pharmacy stated that its major goal was to supply safe and cheap generic meds at price buyers could afford. The medications available on Menshappiness.com had their source in Indian Pharmaceutical companies. They were all approved by the FDA according to Menshappiness.com. The pharmacy had fairly affordable prices. For example, a pill of generic Viagra 100mg was being sold at a price that ranged between $1.25 and $2.99. The lowest price men could have paid for generic Cialis on Menshappiness.com was $1.33. The prices for the ED drugs decreased as the buyers increased the number of pills they were purchasing.

Menshappiness.com was shipping its ED medications worldwide. The store only indicated that its meds wouldn’t be shipped to some few Asian countries. The shipping methods available on the drugstore included Express International Mail and Standard International Airmail. These two shipping options differed in terms of cost and the time the medications sent through them took to reach the buyer. The express shipping cost buyers $29.95. The method took approximately 5 to 9 days before medications reached the buyer. Packages shipped via this method could be traced. When a buyer opted for the Standard airmail method, he or she was supposed to pay $9.95. The delivery time of this method was approximately 10 to 21 days. Buyers who wish to know about the progress of their order would not prefer this method since it did not have a tracking option.

The pharmacy was accepting two main payment methods. These were credit cards and bitcoin. However, the pharmacy was hiding the fact that it was accepting payments via bitcoins by stating on its FAQ page that it accepts only credit cards as their payment method. The bitcoin method became apparent when a buyer checked out items. The accepted credit cards included VISA, Mastercard, American Express, and JCB. The pharmacy made it pretty easy for buyers to switch currencies in order to reduce the hassle involved when paying.

After shipping medications, Menshappiness.com was not accepting medication returns. The drugstore also did not allow its customers to cancel any of the orders they had placed. Contacting Menshappiness.com could have been done via 3 main ways. The buyers could use the live chat option available on the drugstore website. Also, buyers could use the drugstore contact page to send the customer support department an email. The pharmacy had three phone numbers. These included +1 646 505 29 37, +44 870 471 8431 (UK), and +1 866 417 5821 (Toll-free for the United States customers).

To determine whether Menshappiness.com was a perfect pharmacy for men to source ED medications, I decided to check the reviews available online. I was hoping to get some testimonials for the web pharmacy on a third-party review-collecting website since the drugstore had already been online for more than 9 years. To my surprise, the pharmacy has exactly 0 testimonials on external reviews collecting websites. The only reviews I found for the drugstore were available on its official website. I have captured a couple of these reviews below:

Believing onsite testimonials is the quickest way to fall into a scammers trap. The onsite reviews could be crafted by the pharmacy management in order to try and fool unsuspecting customers. The best reviews are usually available on third-party review-collecting websites.

After searching the web, I did not manage to locate any reviews which have been written in 2018 for Menshappiness.com. I searched the pharmacy on scamadviser.com and on Legitscript.com. The pharmacy was hiding its actual physical location. Scamadviser.com could not determine whether it is located in Estonia or in the Russian Federation. After reviewing Menshappiness.com, Legit Script determined that the drugstore did not have the required qualities for a drugstore to be considered genuine.

Despite Menshappiness.com having high prices than a large number of online pharmacies I have come across, the drugstore did not have a way buyers could have used to lower their medication prices. The store lacked both coupon codes and offers. The only way buyers could purchase meds at a cheaper price was through buying their drugs in bulk. As the buyer increased the number of pills that he or she was paying for, the price of a single pill reduced.

Although Menshappiness.com indicated its major aim was to help men treat erectile dysfunction at a cheaper price, the pharmacy appeared to have had a hidden agenda. The drugstore has a row trusting rating, and it has no external reviews. The onsite reviews available on its site appeared not real.